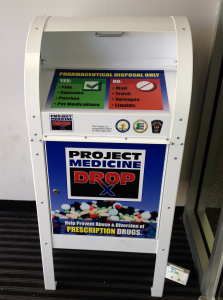 More than nine months after its implementation at Manchester Township Police headquarters, a Project Medicine Drop box has helped keep nearly 1,000 pounds of unneeded prescription drugs from potentially falling into the wrong hands.

In an effort to help combat the growing drug problems in Ocean County, the Manchester Township Police, in conjunction with the New Jersey Department of Consumer Affairs, implemented the drop box location inside the vestibule of its 1 Colonial Drive headquarters in July 2013.

Since then, residents have used the secure drop box to deposit nearly 1,000 pounds of medications that are expired, unwanted or no longer needed.

“We’re pleased with the success Project Medicine Drop has found here in Manchester so far. It’s easy for residents to drop off their unneeded prescription medications, which keeps them out of the wrong hands and aids in our battle to combat drug abuse,” said Detective Albert Vega, who serves as the program coordinator in Manchester.

The box is accessible 24 hours a day, seven days a week, and can accept pills, capsules, patches and pet medications still in their packaging. Unpackaged, loose or leaking containers, as well as syringes and liquids, are not permitted in the box.

Medications deposited are collected regularly by police personnel and disposed of under strict supervision by state-authorized firms. Because pill containers may contain patient information, such as names and address, every effort is made to protect the privacy of those who utilize the box.

Prescription drugs are the number one substance abused by children ages 12 to 17 years old, with much of that supply unwittingly coming from the medicine cabinets of their parents, grandparents and friends.

Medication abuse can be a gateway to other drug use and crime, including theft. Abusers have been known to steal pills from unsuspecting family members, meaning the unneeded prescriptions left in medicine cabinets can fall into the wrong hands and lead to a dangerous habit.

More information about Project Medicine Drop is available by calling 800-242-5846 or visiting www.njconsumeraffairs.gov/meddrop.