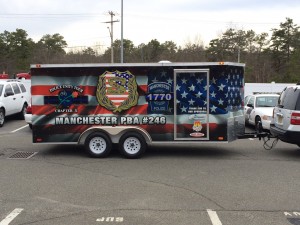 Officers biking to the National Law Enforcement Officers Memorial in Washington DC as part of the 2014 Police Unity Tour memorial ride will have the support of a new trailer purchased by Manchester PBA 246.

The trailer will accompany Manchester’s riders as they take a four-day journey to the memorial in honor of those who made the ultimate sacrifice.

“The tour just keeps getting bigger and bigger each year. We wanted to have something visible that represents why we participate in the ride, which is why the trailer was an important purchase for the PBA,” said Patrolman Arthur Cronk, Manchester PBA 246 Delegate who also serves as Delegate to the Unity Tour’s newly-formed Chapter X representing Central New Jersey.

Founded in 1997, the Police Unity Tour has raised awareness and millions of dollars in funding for the National Law Enforcement Officer’s Memorial and Museum. Manchester Township Police Officers have been participating for the past nine years. They ride in honor of Officer Robert Tobias, who was killed while conducting a traffic stop along Route 70 in 1975.

The Officers will depart on the morning of May 9 and arrive at the memorial on May 12, a day before the candlelight vigil honoring fallen Officers is held.