At approximately 1:35 p.m. on April 13, 2014, a crash on State Highway 70 at the intersection of Roosevelt City Rd. caused traffic delays for several hours. 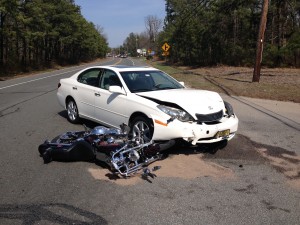 The Lexus was traveling west on State Highway 70 prior to the crash.  Mr. McCloskey sustained potential serious injuries as a result of the crash and was flown to Jersey Shore University Medical Center by MONOC medi-vac helicopter for further treatment.

Medical attention was provided at the scene to Mr. McCloskey by EMT’s from Quality Medical Transport and Paramedics from MONOC.  Mrs. Kreyling and her two occupants, Phillip Dolcemascolo, age 70 also of Clifton, and Marion Dolcemascolo, age 91 of Berkley Twp., refused medical treatment at the scene of the crash.

There were several other motorcyclists riding with Mr. McCloskey at the time of the crash who were not involved.

This crash is under the investigation of Ptl. Paul Bachovchin of the Traffic Safety Section.  Assisting at the scene were members of the Manchester Twp. Police Patrol Division, the Ocean County Sheriff’s Dept. Criminal Investigation Unit, NJ Department of Transportation Traffic Diversion Unit and the Whiting Vol. Fire Department.