After a distinguished career in law enforcement that began in 1987, Manchester Township Chief of Police Brian J. Klimakowski has announced his retirement, effective March 1, 2015. Appointed Manchester’s 5th Chief of Police in 2011 after 24 years of service, Chief Klimakowski is a highly decorated public official who has been recognized throughout the state for his leadership.

Hired by Manchester as a Dispatcher in 1987 and Patrolman one year later, Chief Klimakowski has had the privilege of serving under all of the Police Division’s previous Chiefs. Also serving as Public Safety Director, Chief Klimakowski worked his way up the ranks with promotions to Sergeant in 2000, Lieutenant in 2002 and Captain in 2007. 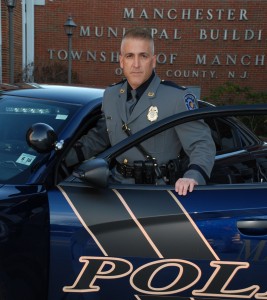 “It truly has been an honor to serve Manchester Township and dedicate the entirety of my law enforcement career to my hometown,” said Chief Klimakowski, a 1986 Manchester Township High School graduate. “I’ll always be grateful for having had the privilege of working among the finest Police personnel in the State.”

Working with township officials, Chief Klimakowski focused his tenure on bolstering the Police Division’s staffing back to an adequate level. Under his watch, the Police Division voluntarily met all of the standards required by the NJSACOP Law Enforcement Accreditation Commission, bringing prestige and significant professional achievement to Manchester Township.

Chief Klimakowski has always prided himself on his accessibility to members of the community, listening to all comments and concerns. His leadership follows a “citizen first” mind-set which he has endowed to each Officer within the Manchester Township Police. Further, his extensive experience in directing all aspects of law enforcement and emergency service operations kept Manchester well prepared for weather emergencies like Hurricane Sandy and many winter storms.