Missing for more than two years from her Whiting home, “Annie,” a black and tan mixed terrier, has been reunited with her owner thanks to the efforts of Manchester Township Animal Control. 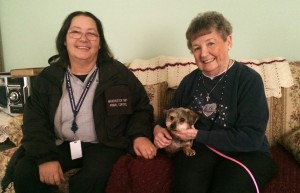 Animal Control Officer Margaret Dellapietro was able to reunite Annie and her owner, June Nicolaus, after capturing the dog and checking her microchip identification. Annie, who snuck away from her Crestwood Village 6 home, was adopted by Nicolaus from the Popcorn Park Zoo just three months before she went missing.

“I was broken hearted,” said Nicolaus, who canvassed the community with flyers and alerted authorities after her pet went missing in November of 2012. For more than two years, Annie survived on her own in the elements, and her whereabouts remained a mystery to her owner until this week.

Annie, who apparently had been living in wooded areas surrounding Crestwood Village, was being fed by a resident there since June of 2014. This resident on February 10 contacted ACO Dellapietro, who arrived on scene and was able to coax Annie into a humane trap using her unfinished breakfast sandwich. Though Annie had lost her collar and the identification it carried, ACO Dellapietro was able to confirm her identity through the dog’s microchip.

When Annie was reunited with her owner, her fur was matted and dirty, making her almost unrecognizable. But, Nicolaus, who initially was in disbelief that Annie had returned, said that she immediately recognized her pet’s eyes.

“In the back of my mind, I always held out hope,” Nicolaus said. “Miracles do happen. I was over the moon.”

ACO Dellapietro said that reuniting lost animals with their families is one of the most rewarding aspects of her job, which she has been doing for 14 years.

“I love doing what I do, for moments like this,” said ACO Dellapietro.

Pet owners are reminded that having their animals microchipped can help to bring them home safely and expeditiously should they go missing. As in the case of Annie, collars can become lost, making microchips a crucial source of identification.

Mike’s Pet Grooming in Whiting donated grooming services to Annie, and Dr. Teal Ranney of Whiting Veterinary Clinic is caring for her health. Annie is enjoying being back home, again living comfortably alongside her owner.