On Friday, September 25, 2015, at approximately 3:30 p.m., members of the Manchester Township Police responded to Route 70 in the area of mile marker 39 for the report of a motor vehicle accident involving two vehicles. Upon arrival, officers learned that a 2005, Nissan Sentra, being operated by 70 year old, Lorraine Theodore of Whiting was traveling westbound on Route 70 when it crossed over the center line into oncoming traffic and struck a 2015 Toyota Tacoma being operated by 29 year old, Brian C. Sullivan of Manahawkin. Sullivan was travelling eastbound at the time of the crash. 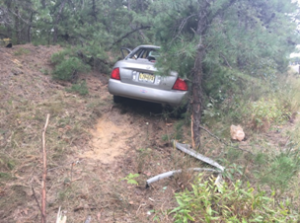 The impact caused the Nissan Sentra to exit the roadway and strike several small trees. Theodore was airlifted to Jersey Shore University Medical Center in Neptune by MONOC Medi-Vac helicopter for treatment for a medical emergency. Sullivan was transported to Community Medical Center in Toms River by Quality Medical Transport for complaint of neck and back pain.

Also assisting at the scene were members of the Whiting Volunteer Fire Department. The crash is currently being investigated by Ptl. Michael Anderson of the Manchester Township Police Traffic Safety Section.