Manchester Police Partner with Community to Give Heroin Awareness Presentation

Manchester Police Partner with Community to Give Heroin Awareness Presentation

A crowd of more than 100 community members gathered at the Whiting Assembly of God this past weekend to learn about the heroin epidemic as it specifically relates to Manchester Township and what is being done by Manchester Police to combat the problem.

Sponsored by the Whiting Assembly of God and organized by Pastor David Charlesworth and Deacon Richard Curtis, the Sept. 18, 2015, program featured a keynote address by Sgt. James Komsa of the Manchester Township Police Narcotics Enforcement Team. Sgt. Komsa outlined the process by which a person typically becomes addicted to heroin, the warning signs indicating drug use, treatment options, and methods of reporting drug activity. 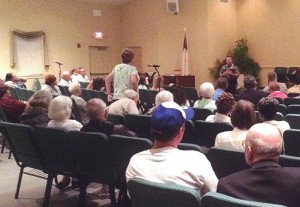 This program is designed for someone who has little to no knowledge about heroin use/abuse and it keys in on common warning signs to determine if a relative/friend may be using heroin” Sgt. Komsa said. “Programs like this, coupled with increased enforcement, are helping to curb heroin use and keep our community safe.”

Heroin overdose deaths in the United States nearly quadrupled between 2002 and 2013, fueled by lower costs as well as increased abuse of prescription opiate painkillers, U.S. health officials said in a July 2015 Reuters article. This report found that heroin use increased by 63 percent from 2002 to 2013. In 2013, roughly 517,000 people reported that they had used heroin in the last year, a 150 percent increase from 2007. As many as 8,200 people died from heroin overdoses in 2013 alone.

Also at the presentation were Mon-Oc Paramedics Scott Carter and Peggy O’Neill, who spoke about Narcan, a prescription spray which is used to revive an individual suffering from an opiate related drug overdose. Representatives from recovery outlets including America’s Keswick, Barbara’s Place and Teen Challenge also addressed the audience.

A question and answer period followed the presentation, and the audience was very responsive and asked numerous questions of all the presenters. Future presentations are planned within Manchester Township and will be announced at a later date.

More information about drug abuse, including health effects and treatment options, can be viewed at the National Institute on Drug Abuse website, www.drugabuse.gov. Resources within the State of New Jersey for combating addiction can be found at www.knowaddiction.nj.gov.

Residents are reminded that if they witness suspicious activity in their neighborhood, that they should contact the Manchester Township Police at 732-657-6111 or use the “Tip Line” link at www.ManchesterPoliceNJ.com.