Four Manchester Township Police officers and another man sustained injuries after a driver struck a stopped vehicle during a motor vehicle stop on Route 37 Thursday night.

At approximately 11:13 p.m., Ptl. Gavin Reilly and members of the Manchester Township Police Department’s Narcotics Enforcement Team stopped a 1997, Ford Explorer on Route 37 eastbound near Northampton Boulevard in Toms River. At approximately 11:39 p.m., while officers were conducting their investigation, a Ford Expedition which was traveling eastbound struck the stopped Explorer. At the time of crash, officers had the driver of the Explorer outside of the vehicle and under arrest.

Several officers were outside of their cars near the Explorer at the time of the collision. The driver of the Expedition, 39-year-old, Christopher Zarro of Manchester, immediately stopped after the crash and got out of his vehicle. Zarro did not appear to be injured and refused medical treatment. 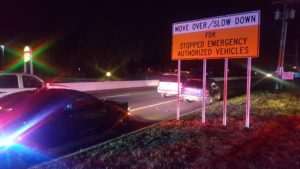 The collision injured four Manchester Township Police officers; Sgt. Richard Mazza, Ptl. Christian Nazario, Ptl. Gavin Reilly and Ptl. Peter Manco. Injuries to Mazza, Nazario, and Reilly were minor in nature and ranged from two injured knees and an injured elbow to an injured hand. All three officers did not require additional medical treatment at the scene. The fourth officer, Ptl. Manco, sustained injuries to both knees and lower legs and was transported to Community Medical Center in Toms River by Quality Medical Transport where he was treated and released. The man arrested during the initial motor vehicle stop sustained minor injuries to his back and legs but refused medical attention at the scene. 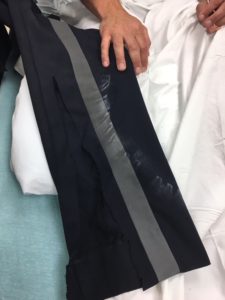 This incident comes just one day before Governor Phil Murphy officially dedicates a section of Interstate  195 in honor of New Jersey State Police Trooper Marc K. Castellano, who in 2010, was killed in the line of duty when he was struck by a vehicle while on the shoulder of that highway.

We would like to remind drivers that it is the law (NJ Title 39:4-92.2) to slow down, and if safe, move over – away from police, fire crews, paramedics and tow truck drivers when they see flashing lights on the side of the road. Drivers are encouraged to visit www.moveoverlaw.com for more information.