On Thursday, June 18, 2015, at approximately 6:30 a.m., members of the Manchester Township Police responded to a motor vehicle crash on Route 539 near the intersection of Hegstrom Road in the Whiting section of town. 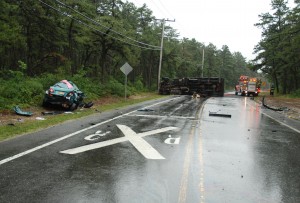 Upon arrival, it was learned that a 2010, Toyota Corolla, being operated by 40 year old, Erin K. Dougherty of Little Egg Harbor, was traveling northbound on Route 539 when she crossed the center line and was struck by a 2005, Peterbuilt dump truck being operated by 72 year old, Robert J. Letu of Jackson Township. The dump truck, which is owned by Bil-Jim Construction out of Jackson, was travelling southbound at the time of the crash.

After the initial collision, the Peterbuilt dump truck flipped onto its passenger’s side spilling approximately 25 tons of gravel onto the roadway. Ms. Dougherty was treated at the scene for back pain and lacerations to her arms and body and Mr. Letu was treated for shoulder, back and next pain. Both drivers were transported by ambulance, to Jersey Shore University Medical Center in Neptune for additional treatment. Their condition is not currently known. 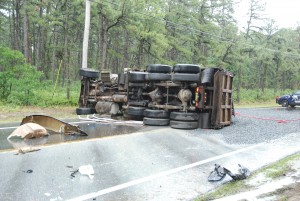 The roadway was closed and traffic was detoured for several hours during the investigation. Assisting at the scene were the Whiting Volunteer Fire Department, the Ocean County Road Department, members of the Whiting Volunteer First Aid and Quality Medical Transport, as well as members of the NJSP Commercial Truck Unit, the Manchester Township Office of Emergency Management, the Ocean County Health Department and crews from JCP&L. This crash is under investigation by Patrolman Douglas Higgins and Patrolman Thomas O’Hare of the Manchester Police Traffic Safety Section.