On Saturday, April 15, 2017, at approximately 4:07 p.m., members of the Manchester Township Police responded to the intersection of Coolidge Ave and New York Ave in the Whiting section of town for the report of a two vehicle crash. 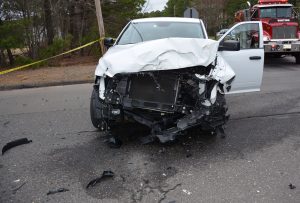 The investigation revealed that the driver of the Chevrolet was traveling eastbound on New York Ave and failed to stop at the stop sign prior to entering the intersection causing the Dodge, who was traveling southbound on Coolidge Ave and had the right of way, to impact him causing the Chevrolet to overturn two times. Due to commercial floor cleaning agents that were located in the rear of the Chevrolet, Hazmat was dispatched as a precautionary measure. Da Silva Castro was transported via helicopter to Jersey Shore University Medical Center where he is listed in critical condition. Santos and Ribciro were also transported via ambulance to Jersey Shore University Medical Center and were evaluated for non life threatening injuries and released shortly after.