The Manchester Township Police is proud to announce that Chief Brian Klimakowski was named as the recipient of the 2014 Chief Sandy Danco Service Award presented by the New Jersey State Association of Chiefs of Police.

Instituted by the NJSACOP in 2007, the Chief Sandy Danco Award recognizes annually a member Chief for outstanding service to the Association, the membership, and the law enforcement profession, according to Executive Director Mitchell Sklar. 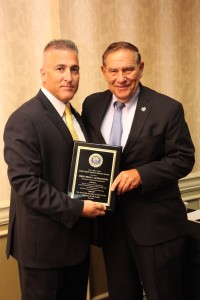 “I thought there was no question Chief Klimakowski is deserving of this award,” said Chief Paul Cell, who is the Association’s President.

Chief Klimakowski was selected for the honor because he always heeded the call to action whenever the NJSACOP needed his help, even on his personal time, said Chief Cell. This included stepping up to serve on the NJSACOP Homeland Safety Committee when an unexpected vacancy opened.

“It is truly an honor to be recognized by the New Jersey State Association of Chiefs of Police, an organization I respect for its continued dedication to upholding quality policing throughout the state,” said Chief Klimakowski.

The award was named in honor of retired Clark Police Department Chief Anton “Sandy” Danco, Past President of the NJSACOP. Executive Director Sklar said that Chief Danco served as an exemplary leader of the NJSACOP, mentoring and tirelessly advocating for police chiefs and professional police leadership in New Jersey.