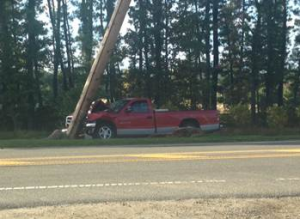 The driver of the vehicle was identified as Thomas A. Buchko, 41, of Manchester. The vehicle was traveling south on Ridgeway Boulevard, near the River Point adult community, when Buchko attempted to swat a large spider that had lowered itself in front of his face, causing him to leave the roadway and strike a utility pole.

Buchko exited the vehicle prior to police arrival. He was treated by Manchester First Aid at the scene for swelling of his right eye caused by the airbag deployment, but refused further treatment. Buchko was wearing a seatbelt at the time of the crash.

JCP&L was requested to respond to the scene. Ridgeway Boulevard between County Routes 547 and 571, was closed until JCP&L arrived to secure the utility pole.