On Monday, April 11, 2016, at approximately 10:46 a.m., officers from the Manchester Township Police Department responded to the area of Route 70 near mile marker 37 for the report of a motor vehicle crash involving a box truck which had left the roadway and crashed into the woods.

Upon arrival, officers learned that a commercially operated, white, 2005, Isuzu box-style truck was traveling westbound on Route 70 near the Manchester Township Public Works Facility when the driver lost control of his vehicle and ran off onto the west bound shoulder into the woods. The Isuzu then collided with several large trees before getting pinned in between two of them. 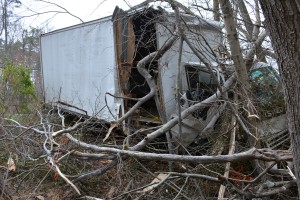 The driver of the truck, 49 year old Adam Daniel of Hackensack, was properly restrained at the time of the crash and only suffered minor injuries to his left hand. The truck was not carrying any cargo at the time of the collision and Mr. Daniel refused any medical treatment. Route 70 was closed for approximately one hour causing extensive delays while police and first responders were on the scene. Assisting at the scene was the Whiting Volunteer First Aid Squad.The crash remains under investigation by Patrolman Ian Bole from the Manchester Township Traffic Safety Unit.