The caller who reported the fire also alerted the 75 year old female still inside the home, and she was able to exit safely prior to the arrival of police and fire personnel. Responding were fire companies from Whiting, Manchester, Ridgeway, Lakehurst, and Joint Base McGuire-Dix-Lakehurst. While the fire was contained quickly thanks to the fast response of the responding fire companies, neighboring homes were evacuated as a safety precaution. 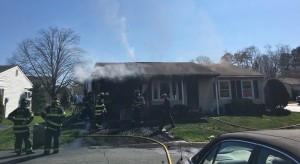 The fire was confined to the garage area, though heavy smoke damage was sustained throughout the home. A vehicle housed within the garage was destroyed by the fire, and a cat perished inside of the residence.