Crash Involving Dump Truck Sends One to the Hospital

Crash Involving Dump Truck Sends One to the Hospital

On Wednesday, August 12, 2015, at approximately 4:41 p.m., members of the Manchester Township Police responded to the area of Routes 70 and 571 for the report of a two vehicle accident involving a SUV and a dump truck. 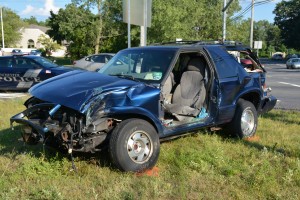 Upon arrival, officers learned that a 1989, Mac dump truck being operated by 22 year old Kevin Borden of Jackson was traveling westbound on County Route 571 when it collided in the intersection with a 2001 GMC being operated by 38 year old Robert Jennings of Manchester.  The SUV was traveling westbound on Route 70 and attempting to turn left on to Route 571 eastbound at the time of the crash. 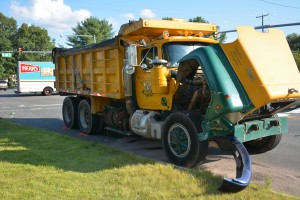 Both vehicles sustained extensive damage and had to be towed from the scene. Mr. Borden sustained minor injuries, but refused medical treatment at the scene. Mr. Jennings sustained more serious injuries and had to be extricated from his vehicle by members of the Ridgeway Volunteer Fire Department. Members of the Manchester Volunteer First Aid transported Mr. Jennings by ambulance to Community Medical Center in Toms River for further treatment of his injuries.

Also assisting at the scene were members of the Manchester Volunteer Fire Department.  The accident is being investigated by Ptl. Paul Bachovchin of the Traffic Safety Section with assistance from the Patrol Bureau.