Driver Collides with Home and Fence in Pine Lake Park

Driver Collides with Home and Fence in Pine Lake Park

At approximately 10:11 a.m. Monday, May 12, Manchester Township Police responded to a single vehicle crash, where a vehicle left the roadway then impacted a house and continued through a fence before coming to final rest in the backyard of a residence. 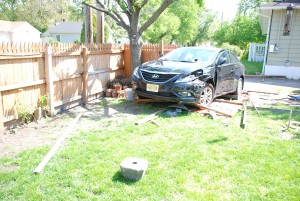 The driver was identified as 45 year old Christian Sorrentino of Manchester.  Mr. Sorrentino may have suffered a medical emergency while operating his 2013 Hyundai Sonata westward on Commonwealth Boulevard.

His vehicle crossed over the center line of the roadway and continued on the lawn of 1216 Commonwealth Boulevard before impacting the house. His vehicle was redirected and then impacted a stockade fence (back yard of) 1112 Southampton Boulevard before coming to a stop.

Mr. Sorrentino initially was unresponsive at the scene when Officers arrived but began to show signs of consciousness. He was transported by helicopter to Jersey Shore University Medical Center in Neptune. Mr. Sorrentino was wearing a seatbelt at the time of the crash.