Law enforcement officers from the Manchester Township Police will be cracking down on unbuckled motorists and passengers as part of the national “Click it or Ticket” 2014 campaign. 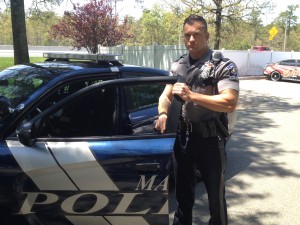 Manchester Township Police Patrolman Ian Bole is among the Officers cracking down on seat belt enforcement during “Click It or Ticket” 2014.

Beginning May 19 and running through June 1, the annual initiative includes high visibility law enforcement seat belt checkpoints and saturation patrols, as well as local and national publicity designed to ensure that drivers and passengers recognize the life-saving value of seat belts.

“Using a seat belt is the simplest way for a driver and his or her passengers to protect themselves when traveling,” said Gary Poedubicky, acting director of the New Jersey Division of Highway Traffic Safety. “In 2010 alone, seat belts saved an estimated 12,546 lives nationwide.”

Poedubicky added that the campaign will focus on rear seat passengers, as well. Despite laws requiring adult back seat passengers to buckle up, adult back seat belt use stands at only 44 percent.The front seat belt usage rate in New Jersey currently stands at 91 percent. Poedubicky noted that the goal for this year’s campaign is to increase the statewide rate to 92 percent. “To meet our goal, we must continue both enforcement and public outreach efforts that educate all motor vehicle occupants about the importance of buckling up, every ride,” he said.

During the 2013 “Click it or Ticket” campaign, 422 police agencies participated in the two-week initiative. As a result of the effort, law enforcement officers issued 26,049 seat belt citations, 4,895 speeding summonses and made 860 drunk driving arrests.

Manchester Township Police Officer Ian Bole said with the 1046 crashes in Manchester last year seatbelts played a major role in saving lives. It’s important that all passengers in the vehicle be properly belted.