A section of County Route 530 in Manchester was closed Thursday morning but has since reopened following a two-vehicle crash. 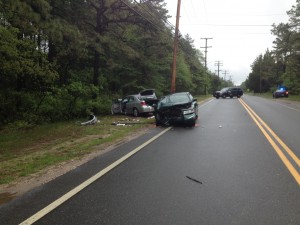 Both drivers were properly restrained by seat belts at the time of the crash and the vehicle airbags deployed. Weiss refused treatment at the scene and Mahoney was transported to Jersey Shore University Medical Center in Neptune.

Severe road flooding brought on by the heavy rain in the area may have been a factor in the crash. The crash is under investigation by Patrolman Douglas Higgins and Patrolman Thomas O’Hare.