On Wednesday, December 30, 2015, at approximately 3:12 p.m., members of the Manchester Township Police Department responded to the parking lot of the Manchester Shoprite on Route 70 for the report of a multi-vehicle accident involving several parked vehicles.

Upon arrival, officers learned that a gray, 2015, Toyota Venza driven by 78 year old, Manuel Sueiro, of Toms River was attempting to back up from a parking space when he inadvertently accelerated instead of applying the brakes causing his vehicle to crash into the back of a white, 2008, Ford Explorer and a red, 2012, Chevrolet Sonic.  The force of the impact caused the Ford Explorer to move and collide with white, 1996, Buick Century and a brown, 2004, Saab 344.  The brown Saab 344 was then set into motion from the impact where it continued for approximately 25 feet before colliding into a beige, 2009, Hyundai Sonata and a nearby curb. 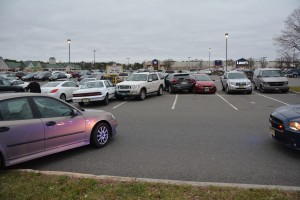 All of the vehicles involved were parked and unoccupied at the time of the collision with the exception of Mr. Sueiro’s vehicle. Mr. Sueiro and his passenger, 52 year old, Rosemarie Sueiro of Toms River, were both uninjured in the collision.  The western portion of the parking lot was closed for several hours as tow trucks needed to separate the vehicles that were involved in the collision.  The crash remains under investigation by Patrolman Ian Bole from the Manchester Township Police Traffic Safety Section.