On February 19th at 8:26 am, police responded to the area of Mayflower Place in the Whiting section of Manchester for a reported motor vehicle crash.  Officers at the scene determined that the vehicle operator, 71 year old William Burns of Whiting had lost control of his vehicle while backing out of his driveway causing it to crash into his neighbor’s residence.  As a result of the crash, the vehicle sustained substantial rear end damage and the residence sustained damage to its exterior.  There were no injuries reported at the scene. The crash is being investigated by Ptl. Peter Manco of the Manchester Police Patrol Bureau. 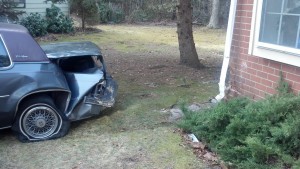