On Friday morning, April 15, 2016, at approximately 7:09 a.m., officers from the Manchester Township Police responded to the area of Route 70 and Sam Pitts Road in the Whiting Section of the Township for the report of a multi-vehicle crash involving four vehicles.

Upon arrival, officers learned that a black, 2013, Honda Civic, being operated by 21 year old Joshua Meeks of Medford, was travelling eastbound on Route 70, when his vehicle was struck in the rear while stopped in traffic preparing to make a left turn onto Sam Pitts Road. His vehicle was struck by a 1998, red Honda Civic, being operated by 21 year, Hilario Guillen of Browns Mills.  The initial investigation revealed that while Meeks was stopped in traffic preparing to turn, Guillen failed to yield and attempted to brake and swerve to avoid a collision. Unable to do so, Guillen struck the rear of Meek’s vehicle and entered the westbound lane of travel. In doing so, his vehicle was struck broadside by a 2009 Toyota Camry, which was being operated by 53 year old Michael Mott of Whiting. As a result of the impact, a fourth vehicle, a 2011 Chevrolet Malibu, which was being operated by 53 year old Sueanne Papaycik, struck the Camry from behind. After colliding with the Camry, Gillen, who was not wearing his seatbelt at the time of the crash, was ejected from his vehicle. Witnesses at the scene sprang into action and immediately began performing CPR on Guillen. Rescue efforts by those who assisted continued until police and first-aid personnel arrived on the scene. These rescue efforts were unsuccessful and he was later pronounced at the scene by the Ocean County Medical Examiner’s Office. 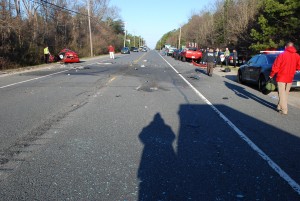 Strong sun glare appears to have been a contributing factor to this crash and may have prevented Guillen from adequately seeing the vehicles in front of him. The drivers and occupants of the other three involved vehicles suffered minor injuries as a result of the crash. Meeks suffered head and neck injuries and was transported by ambulance to Community Medical Center in Toms River for evaluation and treatment while Mott and wife, Francis, who was a front seat passenger, were transported to Jersey Shore University Medical Center in Neptune for treatment of non-life threatening injuries. The driver of Malibu refused medical treatment at the scene.

Assisting at the scene were members of the Whiting Volunteer Fire Department, Quality Medical Transport and paramedics from MONOC as well as detectives from the Ocean County Sheriff’s Office Crime Scene Investigation (CSI) Unit, and the Ocean County Prosecutor’s Office. Also assisting were members of the Manchester Township Office of Emergency Management (OEM) and representatives from the New Jersey Department of Transportation Diversion Team. The crash is being investigated by Officers Antonio Ellis and Michael Anderson of the Manchester Township Traffic Safety Unit with the assistance of Officer Thomas O’Hare of the Patrol Bureau.