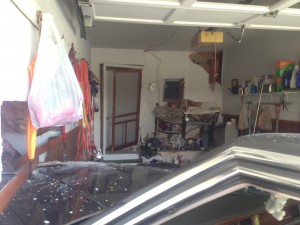 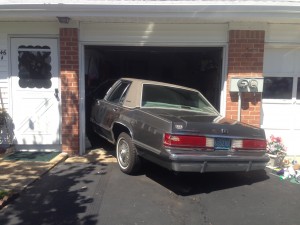 On Thursday April 25, 2013 at 1055 am, an elderly woman drove her 1989 Mercury Grand Marquis through the garage of her home on Azalea Drive, in Whiting.  The driver, identified as Klara Bunkovsky, 89, drove into her garage, through the wall and into her laundry room.  She then backed out of the garage, 60 yards across the street and damaged a patio set on a neighbor’s property.  The driver then put the vehicle back into drive and drove across the street again, impacting her garage and wedging the vehicle partially into her living room. According to the investigating officer, Ptl Christian Nazario, Bunkovsky was checked by Whiting First Aid and refused any further medical treatment.  Manchester Township Building Inspector, Gary Loftus responded to the scene and deemed the home uninhabitable.  Ms Bunkovsky is currently residing with neighbors until other arrangements can be made. Based on Ptl Nazario’s investigation, Bunkovsky was issued two motor vehicle summonses and a mandatory driver’s re-examination.