On Tuesday July 3, 2018 at approximately 3:39 pm, officers from the Manchester Township Police Department responded to the area of Horicon Road near the intersection of Beckerville Road, in the Whiting section of the Township, for a report of a single vehicle crash into a tree. 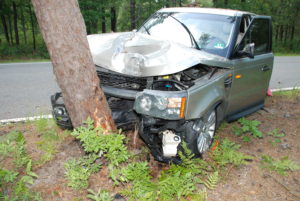 Upon arrival, officers located a beige, 2011, Land Rover, off of the roadway into a large pine tree. The driver, identified as 43-year-old, Kimberly Doman of Millstone, was semi-conscious and was reporting head and neck injuries. Her front seat passenger, 24-year-old, Atiana Doman, who was 9 months pregnant, reported having hip and pelvis pain. Both occupants were transported by Quality Medical Transport to Bowker Field in Whiting where they were then air lifted to Jersey Shore University Medical Center in Neptune for treatment of non-life threatening injuries. As of the time of this release, Atiana Doman has been treated and released.

The initial investigation revealed that the Land Rover was traveling westbound on Horicon Road when it impacted a small deer which was crossing the roadway. After striking the deer, the vehicle swerved to the left, crossed the centerline and left the roadway. After doing so, it collided head-on with a large pine tree on the eastbound shoulder of the roadway. Both occupants of the vehicle were wearing their seatbelts at the time of the crash.

The roadway was closed in both directions briefly. Assisting at the scene were EMTs from Quality Medical Transport and paramedics from MONOC. This crash is being investigated by Sergeant Antonio Ellis of the department’s Traffic Safety Unit.

By MPD|2018-07-06T17:40:47-04:00July 3rd, 2018|Manchester Police News|Comments Off on Driver and Passenger Transported by Helicopter to Trauma Center after Vehicle Strikes Deer and Tree