On Wednesday, August 2, 2017, at approximately 4:28 p.m., members of the Manchester Township Police Department responded to Hampshire Lane in the Crestwood Village section of the Township for the report a person trapped underneath a vehicle. Upon arrival, officers observed a blue, 2011, Hyundai Elantra in the roadway with a 65-year-old female lodged underneath. The female was unresponsive but breathing. 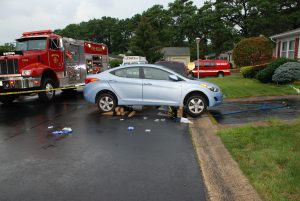 The investigation revealed that the owner of the Hyundai, 71-year-old Josephine Gant of Whiting, had pulled into her driveway after returning from a trip to the store with her 65-year-old passenger, Carolee Ramage, of Lakehurst. When Ms. Ramage exited the vehicle and walked around to the rear to retrieve items from the trunk, the vehicle traveled backwards down the driveway running her over and trapping her underneath. Thanks to the quick response by members of the Whiting Volunteer Fire Department, fire personnel were able to lift the vehicle off of Ramage while members of Quality Medical Transport and Paramedics from MONOC removed her.

Ramage was transported to Jersey Shore University Medical Center in Neptune for treatment of her injuries, to include skin burns, broken ribs and internal injuries. She is currently in stable condition. This crash is being investigated by Patrolman Michael O’Hara of the Department’s Traffic Safety Unit.