On Wednesday, August 19, at approximately 1:15 p.m., members of the Manchester Township Police responded to the Renaissance community in the eastern section of the township for the report of roadway flooding and stranded motorists in the area. The flooding, which was in the area of Barcelona Court, Eleanor Road and Ambassador Drive was the result a short burst of very heavy rain which hit the area during the early afternoon. 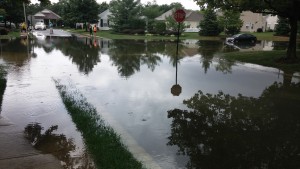 According to Manchester Township Emergency Management Coordinator, Arthur Abline, the flood waters reached as high as two feet in some areas. As a result, two vehicles became stranded in the water and had to be abandoned while their operators walked to safety. At one point, an ambulance which was responding to a first aid call in the development also got stuck on Barcelona Court after it attempted to drive through the water and became disabled. The ambulance was eventually started by a local tow company and pulled to dry land. Multiple Manchester Township police officers responded to the scene to assist the stranded residents and to handle traffic control.

During this time of year, when torrential rain falls occur frequently and oftentimes with little advanced warning, the Manchester Township Police would like to remind the motoring public of a few safety tips when it comes to flooded roadways: