On Wednesday, August 05, 2015, at approximately 5:39 p.m., members of the Manchester Township Police responded to the area of Route 37 and Commonwealth Boulevard for the report of a multi-vehicle accident.

Upon arrival, officers learned that four vehicles had been involved in a chain-reaction rear end collision in the eastbound lanes of Route 37 at the intersection of Commonwealth Boulevard. The crash involved a 2001 Ford F-150, a 1997 Toyota Camry, a 2015 Kia Soul and a 2014 Subaru WRX. 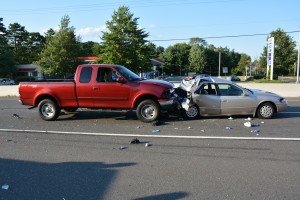 The initial investigation revealed that the Ford F-150, which was being operated by 19 year old Michael Caprio of Manchester, was traveling eastbound on Route 37 in the right lane when it impacted the rear of the Toyota Camry, operated by 62 year old Mary Brucato of Lakewood. Mrs. Brucato’s husband, Charles, age 62, was traveling with her at the time of the crash. Mrs. Brucato, who was stopped in traffic, was pushed by the force of the impact into the rear of the Kia Soul operated by 60 year old Kenneth Jacobs of Holiday City, Berkeley. Mr. Jacobs was traveling with 64 year old, Karen Tummillo, also of Holiday City Berkeley, at the time of the crash. That impact caused the Kia to strike the rear of the Subaru WRX operated by 20 year old Charles Approvato of Toms River. 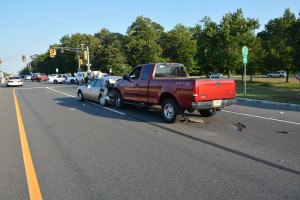 Both occupants of the Toyota were air lifted to Jersey Shore University Hospital in Neptune where Mary Brucato was listed in critical condition, while her husband was listed in serious condition. The driver of the Ford F150, Michael Caprio, was transported by ambulance to Community Medical Center in Toms River for a complaint of head and neck pain. There were no other injuries reported in the crash.

Traffic was diverted on Route 37 for several hours during the investigation by the New Jersey Department of Transportation Incident Management Response Team. Assisting at the scene were members of both the Manchester Volunteer Fire Department and Manchester Volunteer First Aid Squad, as well as Paramedics from MONOC. Also assisting at the scene were investigators from the Ocean County Prosecutor’s Office Vehicular Homicide Unit, and detectives from the Ocean County Sheriff’s Office Crime Scene Investigations Unit. The crash is being investigated by Patrolman Paul Bachovchin and Patrolman Antonio Ellis of the Manchester Township Police Traffic Safety Section.