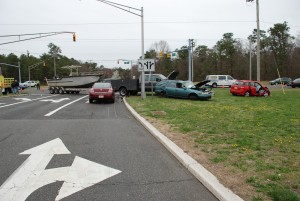 At 14:03 hours on April 18, 2013, a four vehicle crash occurred on NJ Route 70, at the intersection of Colonial Drive and Route 70.  A 2003 Toyota Corolla, being operated by Kevin J. Johnston (age 58) of Manchester, NJ was traveling east on NJ Route 70, when Mr. Johnston attempted to turn left onto North Colonial Drive.   Mr. Johnston entered into the intersection and was impacted on the passenger’s side by a 2012 Ford F450 Quad Cab, Pick Up Truck, being operated west bound on Route 70 by William J. Sloan (age 33) of Lakehurst, NJ.  The impact forced both vehicles to re-direct and impact with a 1993 Ford Taurus, being operated by Maureen P. Wolfe (age 51) of Hamburg, NJ.  The Ford Taurus was stopped in traffic at a red traffic signal.  The Ford Taurus was forced backwards and made contact with a 2007 Saturn Aura, being operated by Dana Laycock (age 37) of Lakehurst, NJ.

Mr. Johnston was traveling alone and did not have his seatbelt on at the time of the crash.  Mr. Johnston was transported to Community Medical Center, Toms River, where he was pronounced at 15:02 hours.  Mr. Sloan was traveling with three passengers, Christopher D. Staffieri, Jack A. Schmidt Jr, and Jeffrey R. Sloan who all reported no injuries at the scene.  Ms Wolfe was traveling with her son, William Wolfe, Ms Wolfe was Medi-Vac to Jersey Shore University Hospital, Neptune and William Wolfe was transported to Jersey Shore University Hospital.  Ms Laycock was traveling alone and reported no injuries at the scene.

Anyone with information about the crash, please contact Manchester Twp Police, Traffic Safety Section, at 732-657-2009, X4401.