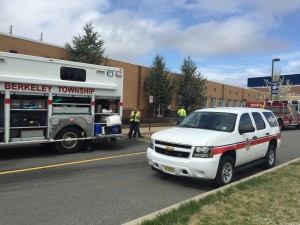 The school administration advised that a student dropped a 500 mL jar of chemicals that shattered on the floor. The five chemicals were identified as Manganese (11) Sulfate Solution, Silver Nitrate Solution 0.2 m, Lead Nitrate Solution, Nickel Sulfate, and Cobalt Chloride Aqueous Solution 2.5 percent. The scene was decontaminated by the Berkeley Township HazMat Response Team.

The teacher and five students present during the incident did not report any injuries at the time of the spill.  The incident appears to be accidental in nature.