A 32-year-old Tuckerton man and his three daughters, as well as a 39-year-old Whiting female were transported to Jersey Shore Medical Center in Neptune after their two vehicles collided head-on on Route 539 in Whiting. Gabriel Bailey of Tuckerton was operating his 2000 Nissan Sentra northbound on Route 539 when he crossed over the center-line and struck a 2016 GMC Acadia being operated by Elizabeth Vanpelt of Whiting in the southbound lane. The collision injured the occupants of both vehicles and caused the roadway to be shut down for several hours. 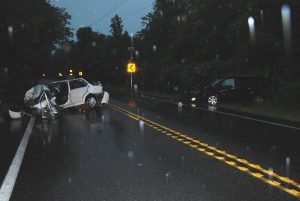 On Monday, June 19, 2017, at approximately 6:22 PM, officers from the Manchester Township Police Department responded to the area of County Route 539 near the intersection of Cherry Street in the Whiting section of the Township to investigate a head-on motor vehicle crash involving two vehicles. Upon arrival, officers observed a white, 2000 Nissan Sentra in the northbound lane with heavy front end damage as well as a blue, 2016 GMC Acadia off of the southbound side of the roadway also with heavy front end damage. 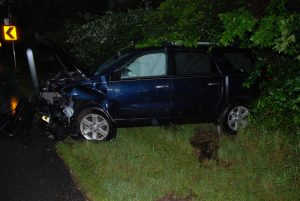 The investigation revealed that the Nissan Sentra was traveling northbound when it crossed over the centerline of the roadway and struck the Acadia in the southbound lane. The operator of the Sentra, Gabriel Bailey, was traveling with his three daughters, ages 3, 6, and 8 and both he and his daughters were wearing their seatbelts and appropriate child restraints at the time of the crash. The operator of the Acadia, Elizabeth Vanpelt, was traveling alone and was wearing her seatbelt at the time of the collision. 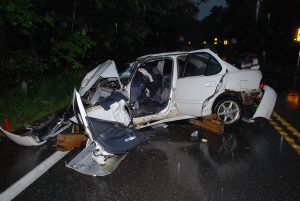 It was raining heavily at the time of the crash and that was determined to be a contributing factor in the collision. All involved occupants were transported to Jersey Shore University Medical Center by ambulance for treatment and evaluation of their injuries. Mr. Bailey, who had to be extricated from his vehicle by members of the fire department, was listed in serious but stable condition with internal injuries and broken bones. Mrs. Vanpelt was listed in stable condition with injuries to her neck and chest. Both vehicles had multiple airbag deployments. The children were admitted for observation.

Assisting at the scene were members of the Whiting Volunteer Fire Department, EMTs from GEM Ambulance Service, and paramedics from MONOC. The roadway was closed for several hours while officers conducted their investigation and the scene was cleared. This crash is being investigated by Sergeant Antonio Ellis of the Manchester Township Police Traffic Safety Section.