On September 1, 2016, at approximately 9:39 p.m., officers from the Manchester Township Police responded to a residence on Fifth Avenue in the Pine Lake section of the Township, for the report of a home invasion and armed robbery. Upon arrival, officers were advised by the homeowners that an unknown armed black male entered their residence through an unlocked door and upon doing so, pointed a firearm at them while demanding a safe. 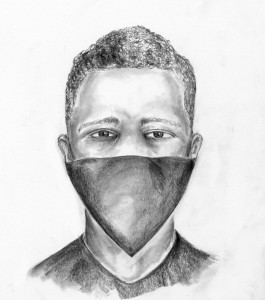 The suspect was said to be wearing gloves and a green bandanna over the lower portion of his face and was carrying a small caliber rifle, possibly a 22 cal. when he entered the residence.  Once inside, the homeowners reported that the male cocked the weapon and made multiple demands for their safe. After being directed to its location, the suspect grabbed it and ran out the front door of the residence. The suspect then proceeded west on Fifth Avenue towards Beacon Street.

The suspect is described as a black male, approximately 5’7″ to 5’8″ tall, weighing approximately 135 lbs. with a thin build. Detectives from both the Manchester Township Police Department as well as the Ocean County Sheriff’s Office Crime Scene Investigations (CSI) Unit responded to the scene to assist with the investigation. The incident is currently under investigation by Ptl. Kyle Rickvalsky of the department’s Patrol Bureau and Det. Craig Beaulieu from its Investigations Bureau.

A composite sketch of the suspect was completed and has been attached to this release. Any individuals having information about this incident or who may know the identity of the suspect are urged to contact Manchester Township Police immediately at 732-657-6111.

Residents are reminded that tips and information can also be reported to the Manchester Police anonymously at 732-657-6111 or online via the Department’s website, www.manchesterpolicenj.com, by clicking the “Tip Line” link.