Originally operated by ASARCO (American Smelting and Refining Company), Inc., the property was sold to and subsequently operated by Heritage Minerals until the cessation of mining operations in the early 1980’s. As a former mining site, the property consists of 7,000 acres that connect the eastern section of the township off of Route 37 to the western section, off of Route 70. During its years of operation, the land was mined so deeply that numerous bodies of water often referred to as ‘lakes’ formed. These ‘lakes’ which are actually groundwater aquifers, litter the landscape on the site. Seemingly unassuming, these bodies of water offer many dangers. 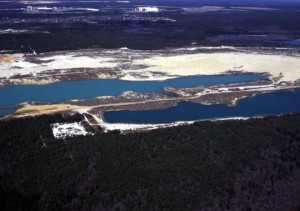 Because the lakes were formed as a result of the mining operation, they do not have stable bottoms or shore lines, the way naturally occurring lakes do. The banks are very unpredictable and dangerously unstable. Those entering the water will quickly realize that after taking a few steps in the soft, unstable sand that the shoreline ‘shelf’ quickly drops off to depths that exceed 60 feet. Some estimates have the largest ‘lake’ on the property as being up to 300 feet deep.

Making matters worse, a recent lack of rain has exposed a greater area of the shoreline shelf putting those near the water perilously close to the steep drop off. Furthermore, unsuspecting vehicle operators and other individuals, including bathers, and families with small children are faced with a higher risk of danger in this exposed area because of its potential to collapse without warning. Under no circumstance should anyone walk or drive on this exposed shelf or approach or enter these waters.

Because these ‘lakes’ are not fed by any streams but rather by a deep underground source, the water is clear but very cold. These ‘lakes’ are filled with mineral-laden spring water from the underground aquifer and as such buoyancy is reduced. Additionally, the water is also much colder, which can result in a swimmer, even an accomplished one, tiring much faster. The characteristics of these ‘lakes’ to include unstable shoreline shelves and water composition have been attributed to several drownings which have occurred on the property.

Enhanced patrols of the area will be in effect this Labor Day Weekend and a strict “no warning” enforcement policy remains in place. Additionally, further criminal charges may result from operating recreational vehicles or lighting bonfires on the property.