A duplex home on Liverpool Circle in the Leisure Village West section of Manchester Township was destroyed after a fire ripped through the residence on October 2, 2015.  The incident was reported around 4:45 p.m.  and upon arrival of police and fire units, the home was found to be fully engulfed in flames. 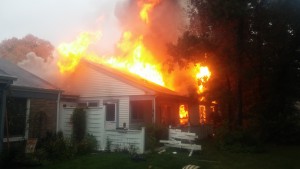 Manchester Police Sgt. Robert Sharry, Ridgeway Fire Department Deputy Chief Brian Flanagan and an unidentified Good Samaritan assisted an elderly resident away from the burning home when he was found to be stuck in his fenced in patio located outside the residence.  The resident was not injured; however, he was transported to Community Medical Center in Toms River as a precaution.

Several nearby homes were evacuated while firefighters from Manchester, Ridgeway, and Lakehurst Fire Departments extinguished the blaze.  One unit of the duplex home was destroyed by the fire and another was left uninhabitable due to fire damage.  This resulted in both residents being displaced from their homes. The American Red Cross assisted with relocating the displaced residents. 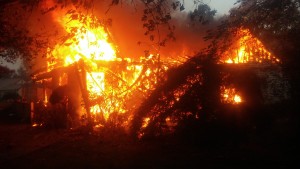