On Thursday, October 8, 2015, at approximately 4:52 p.m., members of the Manchester Township Police responded to the intersection of Route 571 and Commonwealth Boulevard for the report of a motor vehicle accident involving two vehicles. 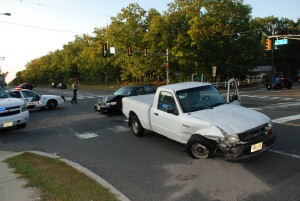 Upon arrival, officers learned that a 1998 Ford Ranger Pickup, which was travelling north on Route 571, attempted to turn left onto Commonwealth Boulevard when it collided with a 1998 Toyota Camry which was travelling southbound. The driver of the Ford Ranger, 67 year old, Valerie Weir of Toms River was transported to Community Medical Center for a complaint of neck and head pain while the driver of the Toyota Camry, 49 year old Michelle Biggin, of Toms River was airlifted to Jersey Shore University Medical Center in Neptune for injuries sustained during the crash. Her current condition is not immediately known although her injuries do not appear to be life threatening. Both involved vehicles had air bag deployment and it appears that both drivers were wearing their safety belts.

Traffic was detoured in the area while officers conducted their investigation. Assisting at the scene were paramedics from Mon-Oc, squad members from Quality Medical Transport and Manchester Volunteer First Aid as well as fire personnel from Manchester and Ridgeway Volunteer Fire Companies. The crash is being investigated by Patrolman Antonio Ellis of the Manchester Township Police Traffic Safety Unit.