The Manchester Township Police Department is proud to announce that Ptl. Brian Collins was recognized for being among the finalists for this year’s Kimberly Smith Ames DWI Prevention Award, presented by the Ocean County Police Traffic Safety Officer’s Association and the Smith Family on December 15, 2016. 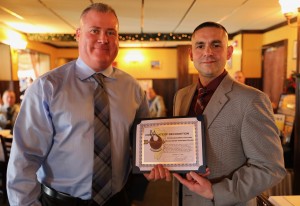 Ptl. Collins, a 17-year veteran of the Manchester Township Police Department, is routinely recognized by his peers for his dedication to enforcing both traffic and DWI laws; so far in 2016, Ptl. Collins has made five DWI arrests. He is a certified Drug Recognition Evaluator, having completed more than 80 DRE evaluations since earning his certification in 2011. Additionally, Ptl. Collins actively trains in the area of DWI and drugged driving detection.

“Each day, Ptl. Collins works to prevent tragedies involving impaired driving, whether that is through enforcement, training, or assisting municipal prosecutors as they prepare for DWI/DRE cases,” said Sgt. Antonio Ellis, who serves as President of the Ocean County Police Traffic Safety Officer’s Association. “His nomination for the Kimberly Smith Ames Award was well deserved.”

The award is named in honor of Kimberly Smith Ames, who was tragically struck and killed by a drunk driver on October 7, 1998, at just 23 years old. The crash not only took Kimberly’s life, but that of her unborn child. This award was created by Ed and Carol Smith in memory of their daughter, and to honor the hard work and determination of an Ocean County Police Officer who has demonstrated a strong commitment towards the effort of stopping drunk driving in their jurisdiction. The top honor this year went to Officer Michael Kelly of the Jackson Police Department.