Several Manchester Township Police Officers, including the four who saved the life of a retired New Jersey State Trooper, were recognized for their heroic and selfless acts during the Annual Departmental Awards Ceremony held in the Municipal Complex Courtroom on Wednesday, December 14, 2016. 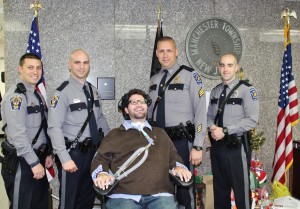 Among the honorees were Sgt. Robert Sharry, Ptl. Michael Guarino, Ptl. Kyle Rickvalsky, and Ptl. Michael Steffen, who received the Life Saving Award for braving a severe snow storm last January to rescue retired NJSP Trooper Brian Malast from a medical emergency in his Whiting home. Trooper Malast was a guest of honor at the awards ceremony, where he was able to reunite with the officers who saved his life. 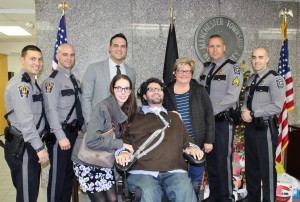 “Our officers make a positive impact on our community each day through their many commendable and courageous acts. This ceremony is to celebrate those accomplishments that go above and beyond, such as the efforts of these four officers and all of the other honorees here today,” said Chief Lisa Parker.

In January of this year, the above-mentioned officers responded to the home of Trooper Malast, who was paralyzed from the neck down in a 2005 on-duty car crash, to find him unresponsive and not breathing. While at the residence, Sgt. Sharry, a trained EMT, discovered that Malast’s breathing tube was disconnected and that he was not getting any oxygen. Sgt. Sharry, knowing how to react because of his training, quickly sprang into action and corrected the problem. Once the breathing tube was reattached, he immediately began CPR. Upon the arrival of Quality Medical Transport, Patrolmen Guarino, Rickvalsky, and Steffen assisted by shoveling a pathway through the deep snow and maneuvered much needed first aid equipment into the residence from the ambulance. 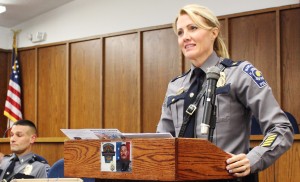 At the end of the ceremony, which saw the presentation of many awards, Mayor Kenneth Palmer offered closing remarks. In doing so, he recounted how he is frequently approached by residents who want to tell him about the many positive impacts that Manchester Township Police officers have on their lives. “Where ever I go, I hear positive comments about our Police Department. I’m very proud to have you all serve our community. As a resident, and on behalf of the Township Council, I thank you all very much,” said Mayor Palmer. 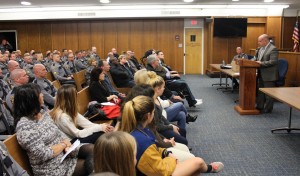 Chief Parker and the entire Command Staff would like to thank all who attended this special event, including Township officials and employees, Police Chaplains James Davis and Robert Clark, and the friends and family members of those honored. Additionally, the Command Staff was proud to present the following awards:

Receiving the ‘Civilian Service Award’ were Mrs. Dana Cerullo and Mrs. Melissa Nazario for assisting in the development of the “Not Even Once” opiate awareness program curriculum which is taught to students at Manchester Township High School and resident, Richard T. Boehm, for his assistance in extinguishing a kitchen fire in his neighbor’s house.

Receiving the ‘Chief’s Recognition Award’ for their sustained efforts in the area of traffic enforcement and criminal law enforcement were Ptl. Ian Bole, Ptl. Joseph Fastige and Ptl. Keith Craig.

Receiving the ‘Drug Enforcement & Seizure Award’ were Ptl. Brian Collins and Ptl. Matthew Juralewicz for their diligent and thorough efforts in uncovering and dismantling a rolling methamphetamine laboratory in Pine Lake Park.

Receiving the ‘Exceptional Duty Award’ was Ptl. Anthony Iliadis for this diligence and tenacity during the course of a motor vehicle stop which resulted in the arrest of three wanted men as well as the seizure of loaded .357 handgun.

Receiving the ‘Chief’s Award’ were Det. Adam Emmons, Ptl. Christopher Cerullo, Ptl. Joseph Fastige and Ptl. Keith Craig for their development and implementation of the “Not Even Once” opiate awareness program taught to Manchester Township High School Students.

Receiving the ‘Wounded in Combat Award’ was Sgt. Joseph Hankins for his actions in combating a suicidal armed assailant who attacked and cut him with an 8” pair of scissors.

Receiving the ‘Combat Cross Award’ was Ptl. Charles Gatnarek for his individual act of heroism during an incident in which there was an imminent threat to the life of both other officers and civilians while in combat with an armed adversary.