Two Charged with an Attempt to Burglarize a Crestwood Village Residence

Two Charged with an Attempt to Burglarize a Crestwood Village Residence

On December 22, 2016, at approximately 5:00 a.m., officers from the Manchester Township Police Department responded to the report of an attempted burglary in progress at a residence on Molly Pitcher Boulevard in the Crestwood Village 4 section of Manchester Township.  As patrol officers arrived in the area, Patrolman Michael Anderson observed a subject off in the distance dressed in a dark jacket with a hat walk between several houses.  When Patrolman Anderson got to the area where the subject was last seen, the subject had disappeared into an adjacent heavily wooded area. Being unable to locate the subject, Ptl. Anderson met with the victim to investigate the attempted break-in. In doing so, it was learned that in the early morning hours of December 22nd, an unknown person or persons removed two exterior screens from the victim’s residence, presumably to look for unlocked windows. When unsuccessful, the involved person or persons threw a large rock through one of the residence’s windows in an attempt to gain entry, however, no entry was mad. This prompted the call to police. After meeting with the victim, Patrolman Anderson checked the surrounding area. While doing so, he located two individuals standing in front of another residence on Molly Pitcher Boulevard. While speaking with the individuals, Ptl. Anderson was able to develop the name of a possible suspect.

Detective Craig Beaulieu assisted with the investigation and conducted multiple interviews and was able to identify, 23-year-old, Ronald Huegel of Beachwood and 19-year-old, Jordan Stuart of Lyndhurst as having been involved in committing the attempted burglary. As a result, Detective Beaulieu charged Stuart with one count of criminal attempt-burglary, and charged Huegal with one count each of criminal attempt-burglary and criminal mischief. Bail for Stuart was set at $2,500.00 and he was transported to Ocean County Jail in default of bail, while bail for Huegel was set at $5,000.00. 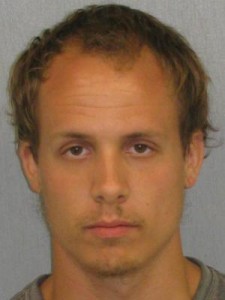 Because Huegal’s whereabouts are not currently known, he has been entered as a New Jersey wanted person. As of the issuance of this release, he has not been located. The Manchester Township Police are requesting the public’s assistance in locating Ronald Huegal whose photo is attached to this release above. Anyone knowing his whereabouts should contact Manchester Township Police at 732-657-6111.