A Christmas day fire severely damages an unoccupied Whiting home. The fire broke out shortly after 2 p.m. at the unoccupied Newark Avenue residence. Although the homeowners were not home when the blaze broke out, their gold retriever was in the garage of the residence. It was safely rescued by officers from the department, however, the homeowner’s cat perished in the fire. 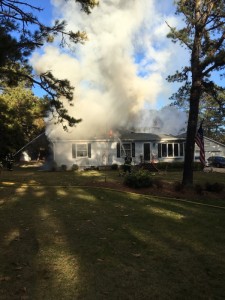 On Sunday afternoon, December 25, 2016, at approximately 2:33 p.m., officers from the Manchester Township Police Department responded to the 1800 block of Newark Avenue in the Roosevelt City section of town for the report of a structure fire.  Upon arrival, it was determined that the fire was fully involved as flames were shooting out from the entire roof area of the residence.  Fallen live electrical wires and a heavy smoke condition kept officers from immediately entering the residence. Once JCP&L was able to cut the power to the residence, police and fire personnel were able enter the home. Once inside the residence, Officers Ryan Saul and Mark Micciulla located a golden retriever in the garage. The canine was safely carried from the residence and transported to Lakewood Emergency Vet by Manchester Township Animal Control Officer Margaret Dellapietro for treatment of what appeared to be smoke inhalation.  Additionally, fire personnel were able to locate a cat inside the residence which had perished in the fire.  Manchester Police Dispatch later made contact with the homeowner who confirmed that no one was inside the residence. 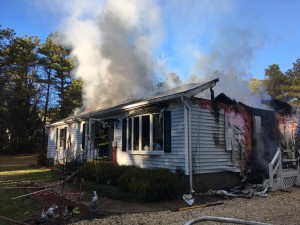 Volunteer firefighters from Bamber Lakes, New Egypt, Lakehurst, Whiting, Manchester, Ridgeway, Berkeley, and Pleasant Plains, as well as firefighters from the Lakehurst Joint Base Fire Department responded and assisted in extinguishing the blaze. Deputy Manchester Emergency Management Coordinator, Mark Pellecchia, responded to the scene to assist the homeowners with establishing alternate living arrangements. Manchester Township Police Detective Adam Emmons along with investigators from the Ocean County Fire Marshall’s Office, the Ocean County Sheriff’s Office Crime Scene Investigations (CSI) unit and the Ocean County Prosecutor’s Office are investigating the cause of the fire, which, as the time of this release, has not been determined. 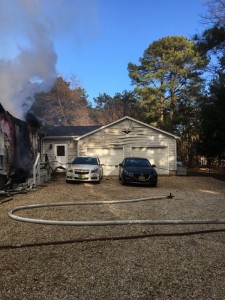