A single vehicle accident lands a Whiting woman in a local hospital with head and neck injuries and causes many in the western section of the township to be without power while a severed utility pole was replaced. 39-year-old, Rosalie Pajarilla of Whiting left the roadway at approximately 7:40 a.m., December 26, 2016, and struck and severed a utility pole before colliding with a tree on County Route 530. The roadway was closed for several hours while emergency and utility workers tended to the scene and replaced the utility pole. 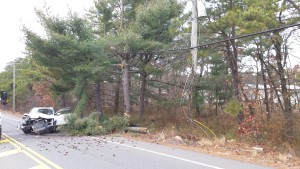 At this time, officers from the Manchester Township Police Department responded to the area of Route 530 and Pine Ridge Boulevard in the Whiting section of the township for the report of a single vehicle car crash with a downed utility pole. Upon arrival, officers located the occupied white 2016, Honda CRV along the wood line of Route 530 with arcing live wires suspended just above the vehicle. The driver, identified as 39-year-old, Rosalie Pajarilla of Whiting, was still in the vehicle and had to be assisted from it by on-scene emergency personnel.  The investigation revealed that the Honda was traveling westbound on Route 530 when it left the roadway and collided head-on with a utility pole. The impact sheared off the bottom of the pole and caused high voltage electrical wires to drop down dangerously close to the vehicle and the ground. After striking the pole, the vehicle continued westbound and struck a tree on the berm area of the roadway. The vehicle had multiple airbag deployments and Pajarilla, who was wearing her seatbelt at the time of the collision, was transported to Community Medical Center for the complaint of pain to her head and shoulders. The investigation is still currently ongoing, however, it has been determined that driver fatigue may have contributed to the cause of accident.  As of Monday afternoon, the driver was reported to be in stable condition at the hospital.  The roadway remained closed and power was interrupted for several hours as emergency workers and utility employees worked to replace to broken pole and clean-up the scene. 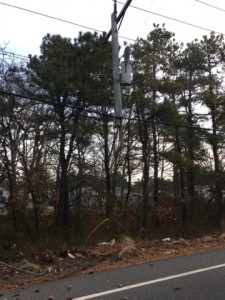 Assisting at the scene were members of the Whiting Volunteer Fire Company, EMT’s from Quality Medical Transport, and utility workers from Jersey Central Power and Light.  The accident is currently under investigation by Patrolman Ian Bole of the Manchester Township Police Department Traffic Safety Unit. 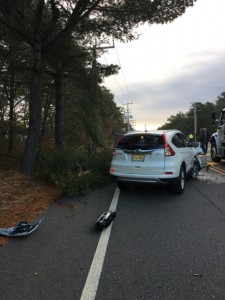 The Manchester Township Police Department would like to remind motorists that tired drivers are similar to intoxicated drivers and to never operate a vehicle without being properly rested. 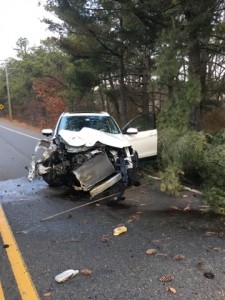