Officers from the Manchester Township Police continued their annual tradition this past week of riding their bicycles to the National Law Enforcement Memorial in Washington DC. On Saturday, May 9th, Officers from Manchester Township began their four day journey to Washington DC in memory of those lost in the line of duty as part of Chapter 10 of the 2015 Police Unity Tour. 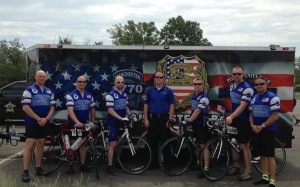 This year, six Manchester Township Police riders biked from New Jersey to the National Law Enforcement Officers Memorial in Washington DC. This year’s tour for Chapter 10 began in Red Bank. Each year the ride is dedicated to an officer from an agency that died in the line of duty. This year’s ride was in honor of Red Bank Police Chief, Stephan McCarthy, who died after a courageous battle with cancer in September of 2013. Riders from Manchester included, Sergeant Michael Leming, Detective Sergeant Chris Hemhauser, Patrolman Michael Anderson, Patrolman Arthur Cronk, Patrolman Anthony Iliadis and Patrolman Kyle Rickvalsky. Ptl. Casey Chant provided motor vehicle support for the riders and towed the Manchester PBA 246 trailer. 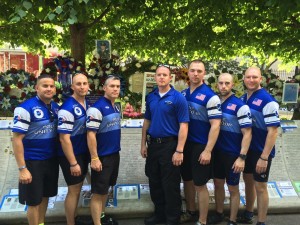 Founded in 1997, the Police Unity Tour, whose moto is, “WE RIDE FOR THOSE WHO DIED”®, has raised awareness and millions of dollars in funding for the National Law Enforcement Officer’s Memorial and Museum. Manchester Township Police Officers have been participating for the past ten years. They ride in honor of all fallen officers, but especially Manchester Officer’s Robert Tobias, who was struck by a passing motorist and killed while conducting a traffic stop along Route 70 in 1975 and for recently fallen Officer, Cpl. Scott R. Thompson, who passed away suddenly on April 10th while exercising in the police department’s gym.

The officers arrived at the memorial on Tuesday, May 12, the day before the candlelight vigil which honored all fallen police officers from across the country was held.