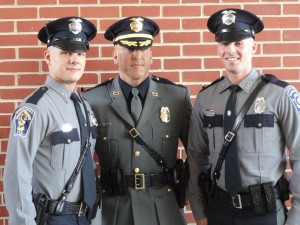 The Manchester Township Police Department is proud to announce that Joseph Reilly and Keith Craig have successfully completed their training at the Ocean County Police Academy as graduates of the 94th Basic Police Recruit Class.   The training which began in February concluded on July 11th with a graduation ceremony at the Ocean County College.  During the ceremony, Joseph Reilly, a U.S. Marine who served in Iraq was recognized several times for his outstanding performance during training.  Ptl. Reilly received the 200 Club’s George Haines Award which is presented to the recruit who has achieved the highest overall average out of all the recruits in his/her class.  Ptl. Reilly received the Ocean County Police Academy’s “High Overall” award with a score of 95.48.  Ptl. Reilly scored a perfect 60 out of 60 score on at least one of the three firearms qualification rounds.  Reilly also achieved the second highest score out of the 11 recruits on the Police Academy’s physical fitness test.  Ptl. Craig, a lifelong resident of Manchester Township and former member of the ROTC was also recognized for his outstanding performance.  Ptl. Craig achieved the third highest score out of the 11 recruits on the Police Academy’s physical fitness test and received the James J. Tracey Leadership Award which was presented by the Ocean County Emerald Society.

Ptl. Reilly and Ptl. Craig have been assigned to Field Training Officers and will begin an intensive twelve week Field Training and Evaluation program which will begin next week.  Upon successful completion of the training program they will be assigned to squads based on the needs of the division.  Attending the ceremony in support of Reilly and Craig were Manchester Police Officers: Chief Klimakowski, Captain Parker, Lieutenant Dolan, Lieutenant Malland, Lieutenant Manco, Patrolman Cronk, Patrolman Bole, and Patrolman P. Manco.