The event, held on June 6 in Wayne at the Police Athletic League building, was hosted by the Passaic County Sheriff’s Office Bureau of Corrections PBA Local 197 and benefited Jayden’s Journey and the New Jersey State PBA’s Survivor and Welfare Fund.

During his final match, Patrolman Terranova was victorious against a fireman from Patterson in a three round decision in the Olympic style event sanctioned by USA Boxing.

“I was happy to participate and represent Manchester. It’s always rewarding to help those in need,” Patrolman Terranova said.

Locally, Manchester PBA 246 and its member officers support our community whenever possible, most notably during an annual benefit golf outing, two 5K runs and a basketball game where the officers played against Manchester Township High School staff. All proceeds from these events went to local charities. 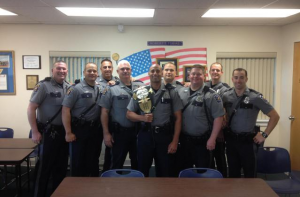