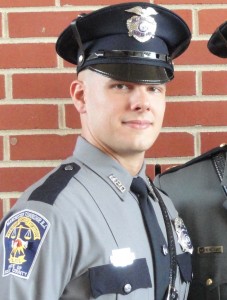 The award ceremony begins at 6:30 p.m. on Saturday, June 14, at FirstEnergy Park when the Lakewood BlueClaws host their annual Law Enforcement Night. A panel of civilian, police and honorary members of the Ocean County Police Traffic Safety Officer’s Association (OCPTSOA) will select the winning officer from those nominated by their departments.

The award was created to honor the life and memory of Jason Marles, an Ocean Gate police officer, badge No. 271, who was tragically killed by an alleged drunk driver on the Garden State Parkway while returning home after working a drunk driving enforcement detail on Thanksgiving morning in 2010.

“By recognizing an Ocean County police officer who has demonstrated a great commitment towards the apprehension of DWI offenders and prevention of crashes, the Jason Marles award increases public awareness of the determination officers have in keeping roadways safe,” said OCPTSOA President Antonio Ellis, a Manchester Township Police Traffic Safety Officer.

Patrolman Reilly made 10 DWI arrests and 23 controlled dangerous substance arrests in 2013. In February 2014, he was awarded the Manchester Township Police Chief’s Award for his outstanding job performance the year prior. A member of the force for just over two years, Patrolman Reilly consistently is one of the top producers in the agency in DWI and CDS arrests.

Before joining the Manchester Township Police in 2012, Patrolman Reilly completed a decorated career in the United States Marine Corps. He was the recipient of the 200 Club’s George Haines Award, an honor given to the recruit who achieves the highest overall average in his or her Ocean County Police Academy class.

The officer selected for the Fallen Officer Jason Marles DWI Award will receive a commemorative plaque, and all nominees will receive a certificate of recognition. In addition, the OCPTSOA and its sponsors will make a monetary donation to a charity selected by the Marles family.