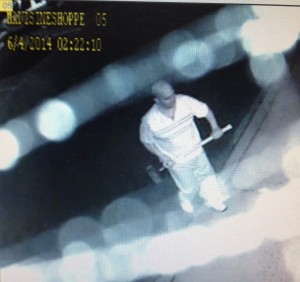 Patrolman Jesse Hoydis and Patrolman Joseph Reilly responded to the 63-I Lacey Road store after an internal motion alarm activated at 2:23 a.m. The Officers were on scene moments later and found forced entry into the store had been made through a shattered front glass door.

Based on a review of video surveillance footage, it is believed a white male of unknown age used a sledgehammer to break the door. He then targeted prescription medications and exited the store through the same door before driving away in a four door sedan.

Anyone who recognizes the man or vehicle used in the burglary is asked to contact Detective Chris Hemhauser at 732-657-2009, ext. 4207. Callers may remain anonymous. Tips also can be submitted through the Tip Line located at www.manchesterpolicenj.com.