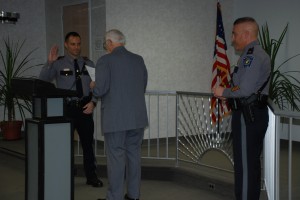 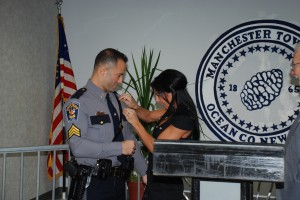 The Manchester Police Division promoted Ptl. Richard Mazza to the rank of Sergeant on November 26, 2012. The promotion was made to replace Investigative Bureau Sergeant Joseph Howell who is set to retire at the end of the year. Patrol Sgt. James Sharkey has been selected as Sgt. Howell’s successor, and his assignment to the Investigative Bureau creates a dayshift patrol supervisor vacancy. Sgt. Mazza has been assigned to fill the vacancy and will remain on the dayshift until the end of the year at which time he will be assigned to a squad based on seniority.

Sgt. Mazza is an eleven year veteran of the Manchester Police Division with prior law enforcement experience with the Seaside Heights and Beach Haven Police Departments. Sgt. Mazza served in the Patrol Bureau for over 6 years before being selected to work as a Detective in the Investigations Bureau. Sgt. Mazza worked as a detective for approximately 3 years before returning to the Patrol Bureau where he remained until his promotion to Sergeant.

During Sgt. Mazza’s tenure with the Police Division he received a total of 14 awards to include the Chief’s Award and the Exceptional Duty Award. In addition to receiving multiple awards, Sgt. Mazza received 18 positive performance notices which were issued to him by various supervisors.

During the ceremony Mayor Michael Fressola administered the oath of office. Sgt. Mazza’s wife, Renee subsequently pinned the Sergeant’s badge upon his chest. The ceremony was attended by Ptl. Mazza’s parents, his son Grayson as well as many of his family and friends, many of which were Manchester Township Police Officers.