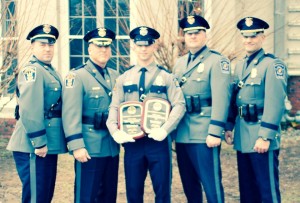 Officer Michael Steffen II, a 2010 graduate of the Richard Stockton College of New Jersey who earned a Bachelor’s Degree in Criminal Justice and qualified for the Dean’s List, took his oath as a Manchester Township Police Officer on Sept. 9, 2013. He entered the Ocean County Police Academy a day later, beginning a challenging training program that concluded in February.

“Prior to sending Officer Steffen to the academy, we had high expectations of him,” said Chief Brian Klimakowski. “We asked him to represent Manchester to the best of his ability at the academy and Officer Steffen made us proud.”

Officer Steffen was one of three full time Police Officers to join the Manchester Township Police in September 2013. Also hired at that time were two Class II Special Officers.