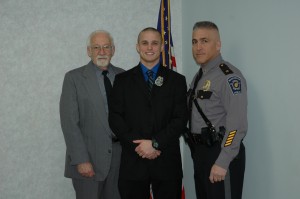 On March 4th, 2013, Michael O’Hara was sworn in by Manchester Mayor Michael Fressola making him the newest officer on the Manchester Police force. Michael O’Hara is a 2006 graduate of Toms River High School South and a 2012 graduate of The Ramapo College of New Jersey, graduating with a Bachelor of Arts degree in Law and Society.     While in high school, O’Hara participated in track and field, football and graduated with a class ranking of 36 out of 380 students.   After high school, Michael O’Hara worked as a Class I Special Police Officer for the Seaside Park Police Department for three summers.  In 2011, he graduated the Class II Special Officer training class at the Ocean County Police Academy as a member of the 29th class, where he achieved an academic average of 94.94.  In July of 2012, he was accepted into the NJ Department of Corrections 227th Correctional Staff Training Class and graduated in November.   While in the Correctional Officer training class he was the recipient of the Professionalism Award, received a certificate of Merit for his exceptional performance and achieved an overall academic average of 96.08. Upon receiving an offer of employment from the Manchester Police Division, O’Hara resigned from his position as a corrections officer in good standing.

Michael O’Hara has been assigned to veteran Police Officer Patrick Cervenak, one of the Division’s Field Training Officers to begin an intensive twelve week Field Training and Evaluation Program. Upon successful completion of the Field Training Program, O’Hara will be assigned to a patrol squad based on seniority.