The Manchester Township Police is proud to announce the arrival of K-9 Officer Lynk, a 14 month old German Shepherd who will reside with his handler, K-9 Officer Steven Wendruff. 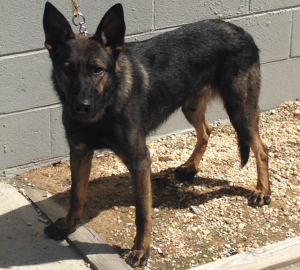 K-9 Officer Lynk arrived at police headquarters on Friday, Aug. 7, 2015, and will begin training as part of the Ewing Township Police Department’s (Mercer County) K-9 Patrol Class No. 3 on Monday, Aug. 10, where he will be trained as a Dual Purpose K-9. Dual Purpose K-9’s are trained in the areas of police patrol operations, such as tracking and locating missing persons, suspects and evidence, as well as in narcotics detection.

With one of the largest senior citizen populations in the state and many vast expanses of wooded areas, coupled with the ever-growing illicit drug epidemic in Ocean County, Lynk is a welcome addition to the Manchester Police force and community.

“The addition of a second canine team to our department will allow us to better serve and protect our community,” Chief Lisa Parker said.