On Sunday, August 9, 2015, at approximately 1:32 p.m., members of the Manchester Township Police responded to the area of Pasadena Road and Lincoln Boulevard in the Whiting section of the township for the report of a motorcycle accident. 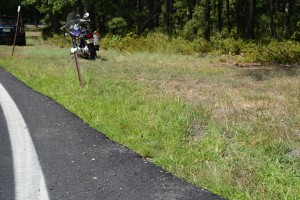 Upon arrival, officers learned that a 2002 Yamaha V-Star motorcycle was traveling eastbound on Pasadena Road when it failed to negotiate the curve at the intersection of Lincoln Boulevard, left the roadway and fell on its side. The operator, 54 year old Debra Fischer of Manchester, was thrown from the motorcycle after the tires made contact with the loose dirt on the shoulder of the road.

Fischer was riding alone and wearing a DOT approved helmet at the time of the accident. Fischer sustained significant injuries to her shoulder and neck and was transported by ambulance to Jersey Shore University Medical Center in Neptune. Her current condition is not known.

Assisting at the scene were members of Quality Medical Transport as well as paramedics from MONOC. The accident remains under investigation by Patrolman Ian Bole from the Manchester Township Police Traffic Safety Section.