On Sunday, August 9, 2015, at approximately 3:30 p.m., members of the Manchester Township Police responded to the area of Route 37 and East Main Street for the report of a single vehicle accident into the woods. 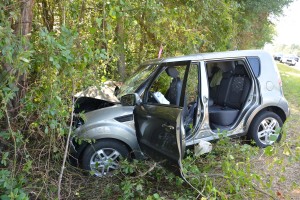 Upon arrival, officers determined that a gray, 2011 Kia Soul was traveling eastbound on Route 37 in the area of East Main Street when the operator lost control of the vehicle and ran off the roadway, colliding head-on with a tree. The 17 year old operator, whose identity is being withheld due to his age, was properly restrained and suffered back, neck, chest, and leg injuries. He was transported to Jersey Shore University Medical Center in Neptune by ambulance for treatment of his injuries.

The front seat passenger, 18 year old, Kyle J. Nickerson of Jackson, did not appear to have been wearing his seatbelt and needed to be extricated from the vehicle by members of the Manchester Township Volunteer Fire Company. Nickerson suffered significant head trauma and was airlifted by South Star Medevac helicopter to Jersey Shore University Medical Center. 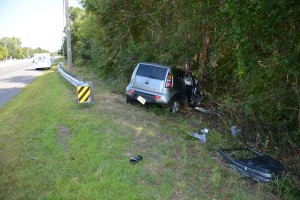 Both Kyle Nickerson and the 16 year old rear seat passenger have been listed in critical condition while the 17 year old operator and the other rear seat passenger, Matthew Olido have been listed in stable condition. The right lane of Route 37 was closed for several hours while emergency responders were treating the injured and investigating the accident.

The accident is currently being investigated by Patrolman Ian Bole of the Manchester Township Police Department Traffic Safety Section and Detective Michael Proto of the Ocean County Prosecutor’s Office.