It is with great regret that the Manchester Township Police announces the untimely passing of veteran Officer Scott R. Thompson on Friday, April 10, 2015. 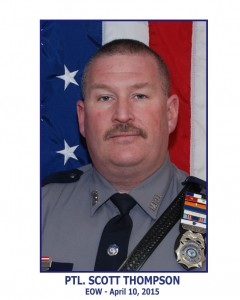 “Scott was a kind, dedicated officer and family man. He loved his family and his fellow officers. Please keep his family in your thoughts and prayers. We all loved Scott and he will be missed terribly,” said Chief Lisa Parker.

Officer Thompson received many commendations and letters of appreciation from those he helped throughout his career. A letter the department once received from a motorcycle crash victim thanking Officer Thompson for his assistance reads, in part: “I could not have been in better hands than those of Officer Thompson. He was caring, professional, and represented your department in a manner which you should be proud.”

Officer Thompson most recently was honored with a 2014 Meritorious Service Award for peacefully resolving a potentially volatile situation with an individual suffering from a mental illness. Before his passing, Officer Thompson was slated for a promotion to the rank of Corporal. He will receive that honor posthumously during a ceremony to be announced at a later date. Information regarding funeral services will be announced as it becomes available.